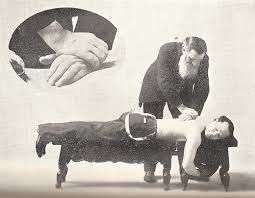 Like conventional medicine, chiropractic is based upon scientific principles of diagnosis through testing and empirical observations.

Chiropractic was founded in 1895 by Daniel David Palmer, a grocer with an intense interest in metaphysics. Prior to his “discovery” of chiropractic, D.D. Palmer was a magnetic healer. He also had interests in phrenology (diagnosing disease based on the bumps of the skull) and spiritualism. Palmer reported to have discovered the principle of chiropractic when he allegedly cured a janitor of his deafness by manipulating his neck. The fact that the nerve which conveys sound information from the ears to the brain does not pass through the neck did not seem to bother Palmer, if he was even aware of this fact.

Palmer created the term “chiropractic,” which literally means “done by hand,” to refer to his new therapy. He argued that all disease is caused by subluxated bones, which 95% of the time are spinal bones, and which disrupt the flow of innate intelligence. He did not subject his ideas to any form of research, but rather went directly to treating patients and to teaching his principles to the first generation of chiropractors.

Palmer believed in the pre-scientific vitalistic notion that health stems from the flow of a spiritual life force. Although vitalism was rapidly declining within scientific thought by the end of the 19th century, it was the centerpiece of early philosophies of health in most cultures. Palmer borrowed this ancient belief and renamed it “innate intelligence” which he claimed flowed from the brain to the rest of the body through the spinal cord and peripheral nerves. All disease, he argued, results from disruption in the flow of innate intelligence. Disruption in flow is caused by spinal subluxations, which are small misalignments in the spine that compress the spinal nerves.

Like conventional medicine, chiropractic is based upon scientific principles of diagnosis through testing and empirical observations. Treatment is based upon the practitioner's rigorous training and clinical experience.  Unlike conventional medicine, which focuses on attempting to treat disease once it occurs, chiropractic attempts to improve the health of the individual in an effort to avoid illness in the first place.  Most people would rather be healthy and avoid illness, if they could.  This is one of the main reasons for the big upsurge in the popularity of chiropractic.  People are recognizing the benefit of seeking an alternative to traditional medicine; one that will help them achieve and maintain optimal health.

Chiropractors understand that one of the main causes of pain and disease is the misalignment and abnormal motion of the vertebrae in the spinal column called a subluxation.  Chiropractic works by removing these subluxations in the spine, thereby relieving pressure and irritation on the nerves, restoring joint mobility, and returning the body back to a state of normal function.

Numerous studies have demonstrated that chiropractic care is one of the most effective treatments for back pain, neck pain, headaches, whiplash, sports injuries and many other types of musculoskeletal problems. It has even been shown to be effective in reducing high blood pressure, decreasing the frequency of childhood ear infections and improving the symptoms of asthma.

The chiropractic approach to healthcare is holistic, meaning that it addresses your overall health.   It recognizes that many lifestyle factors such as exercise, diet, rest and environment impact your health.  For this reason, chiropractors recommend changes in lifestyle eating, exercise, and sleeping habits in addition to chiropractic care.

Find us on the map